By design we thrive off collaborating with existing nonprofits who share our mission to support the needy.  We harness our creative community to generate awareness, create media, raise money, and serve those most in need in our communities.

Here it is #MAOG world, "The Janis Guitar" is finished and ready for Saturday night at @firstavenue - @happybirthdayjanis 2017 is going down in two days and you can win this in the raffle. Proceeds going toward our upcoming event at @dukeuniversity Children's Hospital in partnership with @airaleighdurham and @cheflucasfood - See u Saturday!!! #Janis @rico1727 design - #art #charity #raffle #amazing #win #music #firstavenue #Firstave #minneapolis #classic #Minnesota #fun #guitar #painter #design #singer #JanisJoplin #rocknroll

Massive Amounts of Good has partnered with Chef Lucas Food (501(c)3) to produce the web based docu-series, "Doing Good with Food".  The series is a perfect example of what the MAOG team does when they rally around a fellow nonprofit to create MASSIVE GOOD.  Check out the YouTube Channel below to get a behind the scenes look at what Massive Amounts of Good is doing. 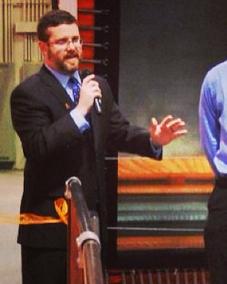 |  ChEcK OUT the web based docu-series "doing good with food"  |

mission & vision
Massive Amounts of Good (MAOG) is focused on making a positive impact on a diverse group of individuals, directly within their space in our culture, through the utilization of the creative gifts and energy of its community.

My time living in the Detroit area opened my eyes to the significant need for a creative force for good in our Midwestern communities.  All too often it seems the focus around giving misses those closest to us, in our communities, in our neighborhoods.  Massive Amounts of Good exists for these people, for us.

2012 - Dr. Turner Berg and Reed Grimm are inspired by the people of Detroit to start an organization focused around the creative process and it's power to create good in people, for people, and with people.

2014 - Massive Amounts of Good facilitates an ongoing donation of thousands of pounds of dairy for the hungry in Western Wisconsin. (update - donation worth close to a 1/2 million dollars as of 2020)

2015 -  Through a partnership with Be The Change Charities thousands of dollars are raised and donated to feed the terminally ill in Minnesota.

2017 - MAOG & Chef Lucas Food visit/feed/entertain Duke University Children's Hospital in North Carolina.  The web-series, "Doing Good with Food" releases 6 episodes & the Chef Lucas Food theme is produced & released by MAOG.  Charity evens include Revival Music Festival & Happy Birthday Janis @ the legendary First Avenue nightclub in Minneapolis, & Give What you Can with Shoeless Revolution.  Food donations were given to the Division of Indian Work.

2018 - Early 2018 events have included Happy Birthday Janis (First Avenue) & Revival Music Festival where MAOG officially collected over 1,000 pounds of food over the 5 years at Revival.  The food has been donated in Freeborn County, Minn. at the Salvation Army.

2020 - The MAOG team refocuses in response to the global pandemic. The MAOG EMERGENCY FOOD ASSISTANCE FUND is created to help the very creators and hospitality workers that have made the organization what it is today. 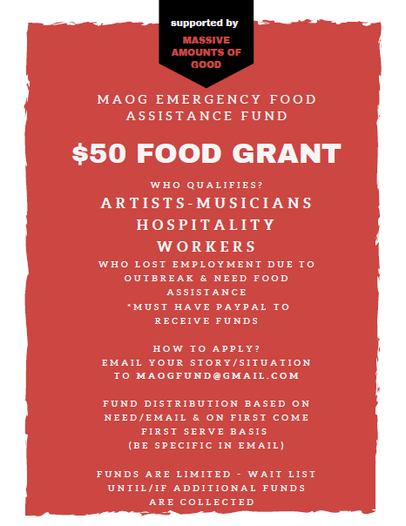 The Creative Process in Action

Our events combine the creative process and creators, with charity.  We hold concerts, raise money at festivals, volunteer, organize food drives... just about anything someone in need in our communities may benefit from, we are interested.